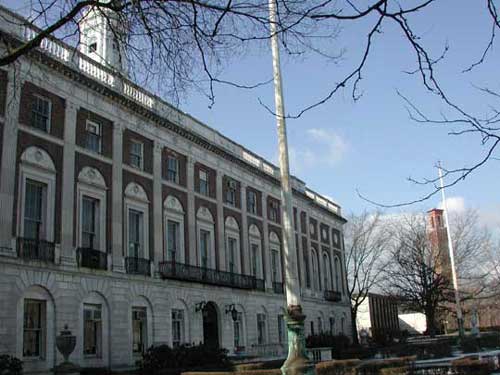 While attending a public board meeting in the City Hall building, downtown Waterbury, I came across a conversation between a popular Reverend in the city, and a city board member.  The city board member was speaking on a new program within the Waterbury Police Department that is going into various neighborhoods and recruiting members to a "citizens police academy".  The board member was proudly boasting that he was part of this "citizens police academy", and telling everyone how great it was for the city to do this.  The Reverend, not to be out done, wanted to quickly boast his credentials, working with law enforcement, when he shouted "I'm with the FBI!".

Immediately I found this disturbing, why is a Reverend, who gets trusted with the most intimate knowledge of peoples lives, working directly with the Federal Government law enforcement division?  When I confronted him on it, the Reverend, at first, was downplaying the significance of his role with the FBI, and said he only receives training once in a while.  Having more knowledge on the subject that I am sure he assumed me to have, I continued to probe and asked about the specifics of his training, including whether or not the FBI specifically told him which bible verses to preach to his "flock", including Romans 13.  At this point, the Reverend seemed to be getting irritated, defensive, and told me that this (City Hall) is not the place to discuss scripture.  Rather than continue the tense exchange, I chose to let the public meeting continue with its regularly scheduled agenda.

So why is the Federal government involved with training local religious leaders?  The best answer I have come across is, FEMA (Federal Emergency Management Association) is working with thousands of religious leaders across the country, to create, what they call, a FEMA Clergy Response Team.

There were many rumors that the Federal government was coming into local towns and secretly training pastors, priests, reverends, etc., but it wasn't until a local news station KSLA 12, out of Shreveport, Louisiana, did a video report (below) on the FEMA Clergy Response Teams, that those rumors were confirmed.

This report opens up with the question, "Will Martial Law ever become reality in America?"...and goes on to say that in the event of a national "emergency", that "the clergy would help the government with potentially their biggest problem, us."  The news report then cuts to Charleton Heston's now-famous speech before the National Rifle Association at a convention back in 2000 where Heston held up his rifle, and responding to gun control efforts, told the crowd, "over my cold, dead hands."

Obviously this report is indicating that the "biggest problem" with the federal government taking complete control over every town and city in America, is those Americans who refuse to comply with the tyranny of martial law, and have guns in defense of their beliefs.

The video report from KSLA 12 then goes on to show brief clips of another news report showing how the federal government was engaging in gun confiscation in New Orleans during the declared "State of Emergency" after Hurricane Katrina.

"Easing public fears, and quelling dissent" is mentioned as the tactic that was used by the Clergy Response Teams, in New Orleans.  KSLA 12 then interviews a Chaplain who says his goal is to "cooperate and get this thing over with, and then we'll settle the differences when the crisis is over."

And then the real craziness starts...Romans 13

This news report then indicates that religious leaders are instructed which bible verses to preach to their flock, and which ways to preach it.  Most specifically; Romans 13, which is being misrepresented to mean that "the government is established by the lord."  The actual verse, from the King James version of the Bible, begins:


“Let every soul be subject unto the higher powers. For there is no power but of God: the powers that be are ordained of God.”

As most of us know, the bible is interpreted to mean different things, by different people.  I tend not to go into religious views or interpretations, because the area is so vast, however I find it ridiculous to believe that if there is a higher power, or "God", that this God would approve of every government, and expect his followers to do the same, regardless of the actions of this government.

Were the governments of Stalin, Hitler, Pol Pot, all ordained by God?  The founders of America fought the tyranny of King George, should they have just let the King do as he wish, and wait for God to take care of any problems?

Author and occult researcher, Gregory Williams, points out several instances in the bible where God does not approve of certain "governments."

"According to the Bible when the “voice of the people” elected Saul and established a government under his authority, God called it a “rejection” of Him.


“And the LORD said unto Samuel, Hearken unto the voice of the people in all that they say unto thee: for they have not rejected thee, but they have rejected me, that I should not reign over them.” 1 Samuel 8:7

Also, "when the Israelites were freed from the bondage of Egypt by Moses the people were told in Deuteronomy 17:16 to never go back to that type of government again. Even Jesus said we were not to be like the governments of other nations, where their benefactors exercise authority one over the other."

Writer Paul Joseph Watson also finds it erroneous to believe God would ordain all governments, when he asks, "Should Jesus have refrained from throwing the money changers out of the temple? Should Moses have cowered from standing up to the Egyptian slave masters? Should John the Baptist have kept quiet about the sinful practices of Herod Antipas, his condemnation of which led to his beheading?"

Remember that every apostle of Christ (except John) was killed by hostile civil authorities opposed to their endeavors.

There have been various reports of religious leaders, or members of different congregations, coming forward with their stories of how their religious organization has either been infiltrated with this system, or has attempted to be infiltrated.  Here are a few examples;

A reader of PrisonPlanet.com submitted a shocking document from a church in Ohio which educates its congregation that Barack Obama’s presidency is appointed by God and that Obama himself is “God’s minister.”  This document, if authentic, literally teaches that Barack Obamas presidency is appointed by God, according to Romans 13.  Read the insane document here.

In this video, a Pastor Anderson describes his views on the FEMA Clergy Response Teams, and says he personally knows of religious leaders taking orders from high officials in government.  In the comments sections, Pastor Anderson elaborates, "Jack Schaap and Jack Trieber were called to meet with George W Bush and were told what to preach. Also, David Gibbs was called into a meeting with about 10 other preachers and told by George W Bush personally to tone down their preaching against homosexuals.  Anyone who went to First Baptist Church of Hammond in early 2005 can verify that Jack Schaap was called in. Plus, there were about 40 other people present to hear what David﻿ Gibbs said."

Greg Dixon, of FreedomsPhoenix.com, claims to have a letter from a pastor of the Grace Shepard Church (location witheld), where the pastor describes FEMA gathering local ministers to help in the event of martial law, and more specifically "the discussion centered around the need of 'locals' to "quell the cowboy mentality" of farmers who may have their stock or crops consequently confiscated and destroyed.."

It has been rumored that Romans 13 was a favorite verse of Hitler to use in his propaganda on the German people, while I have not found any evidence of this, I think it is still important to take a look at the Hitler, Nazi, Christian connection.

At a speech given on March 23, 1933, to the Reichstag, Hitler described Christianity as the “foundation” for German values, as most of the 33 million people living in Germany were Christians.

How did Hitler persuade Christians to go along with his prejudices and genocidal tactics?  Well according to The United States Holocaust Memorial Museum (USHMM), "interpretations of religious scriptures seemed to support these prejudices."

They were also persuaded by the statement on “positive Christianity” in Article 24 of the 1920 Nazi Party Platform, which read:


"We demand the freedom of all religious confessions in the state, insofar as they do not jeopardize the state's existence or conflict with the manners and moral sentiments of the Germanic race. The Party as such upholds the point of view of a positive Christianity without tying itself confessionally to any one confession. It combats the Jewish-materialistic spirit at home and abroad and is convinced that a permanent recovery of our people can only be achieved from within on the basis of the common good before individual good."

There was one small group of Christians who opposed the Nazi regime, they were known as the "Confessing Church".  Its founding document, the Barmen Confession of Faith, declared that the church's allegiance was to God and scripture, not a worldly Führer.  Dietrich Bonhoeffer was a pastor, and founding member of the Confessing Church.  Bonhoeffer became known for his staunch resistance to the Nazi dictatorship. He strongly opposed Hitler's euthanasia program and genocidal persecution of the Jews.  He was also involved in plans by members of the Abwehr (the German Military Intelligence Office) to assassinate Adolf Hitler. He was arrested in April 1943 by the Gestapo and executed by hanging in April 1945 while imprisoned at a Nazi concentration camp, just 23 days before the German surrender.

I wonder which side God was on, Hitler, and the Nazi's, or Dietrich Bonhoeffer and the Confessing Church?

Religion has been a powerful tool used by many men, good and bad, to influence people's thinking and direction.  Combine a religious doctrine, with a powerful orator, and most can be convinced of anything.  I introduce to you Ziggy Eichhorst.  This man gives a sermon trying to convince you not to care about politics or government in any way, because they are leading us to the apocalypse  and that is when Jesus is coming back, so that will be a great thing.  But what if you are mistaken and it is not the apocalypse, and you should have resisted?  I am sure many Christians in Germany thought it was the apocalypse when they were getting murdered, and it wasn't.  Watch the crazy video here:

It is a fact, and no conspiracy theory, that there are "clergy response teams" being set up.  After performing a quick Google search, I found an organization out of D.C. that is advertising for new recruits, as they are in the process of rebuilding and rejuvenating the communities Clergy Response Team (CRT).

In the photo above, pastors from Brooklyn will now be wearing their "Clergy Council Crime Team" jackets, when responding to emergencies.

The last video link I will leave you with is another crazy video of a pastor giving a sermon telling everyone to submit to government.

It was for freedom that Christ set us free; therefore stand firm and do not subject yourself to the yoke of slavery. – Galatians 5:1

I will leave with a quote by Gregory Williams,

"I believe that we may be “endowed by their Creator with certain unalienable Rights,” and “ to secure these rights, Governments are instituted among Men, deriving their just powers from the consent of the governed, but I do not see where that gives us a right to blame God for the governments we establish by that consent for ourselves."
Posted by Connecting The Agenda at 3:17 PM