Satanism In Connection With The Cheshire, CT Murders


Most people in Connecticut remember the home invasion murders that occurred in the town of Cheshire, on July 23, 2007, when a mother and her two daughters were killed by two men, Steven Hayes, and Joshua Komisarjevsky.  The details of the actual home invasion are disturbing, and I will not be discussing that in this article, however you can get a more in depth view of the actual case by clicking one of the many links I will add throughout this article.  I will be focusing on the satanic aspect, and detailing a possible 'dark' influence, mainly in Joshua Komisarjevsky.

During the trial of Joshua Komisarjevsky, the jury heard several people associated with Komisarjevsky speaking on a possible satanic influence in his life.  Armen Abrahamian, a fellow parishioner of the Komisarjevsky family at Olivet Baptist Church in Hamden, told defense attorneys that another member of the church, Richard Chandler, once found Joshua in the middle of a ritual in a Cheshire home.  Chandler had taken Joshua under his wing as a mentor, and sensed that he was in distress, which led him to the home, according to Abrahamian.  Asked by defense attorney Walter Bansley III how Chandler had found the house where the alleged ritual was being held, Abrahamian said, “Richard was praying for Josh, praying he’d find it. This is something that cannot be explained in human terms.”  Details of the ritual were never released, and according to the Litchfield County Times, Richard Handler is now deceased. 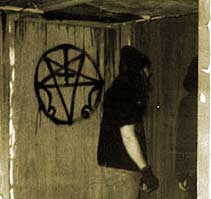 The father of Joshua, Ben Komisarjevsky, told jurors that Joshua would sneak out of the house at night, and that he fell in with a group of boys involved in what his father described as "satanic activities".  One time, Ben Komisarjevsky said, after Josh had been away from home for a few days, he was found with marks all over his body, and even carved the word 'hate' into his arm.  He was hospitalized and then sent to Elmcrest Psychiatric Center in Portland.

The Satanic cult continued to have a negative effect on Komisarjevsky, according to testimony by Eric Perry, a staff supervisor at a Christian boys’ home called the Fold in Vermont in 1996.  Perry’s two weekly reports on Komisarjevsky were shown on the courtroom screen. “Having trouble sleeping,” Perry wrote. “He hears voices saying, ‘Kill yourself.’ He is seeing objects in his room that he believes are related to his prior inclusion in Satanic cults.”  Komisarjevsky also claimed as a teenager to have seen a demon with glowing eyes in his room.

Komisarjevsky's mother, Jude Komisarjevsky, recalled that her troubled son, who dyed his hair orange and started wearing a dog collar, told her when he was about 16, that demons he saw were "after him".

Also, a supermarket owner in West Hartford, Christiane Gehami, told the jury that Joshua would sometimes come around the store to look for work.  She recalls thinking she was "looking at the devil" and denied his offer to work for her.  Komisarjevsky had "dead eyes," added Gehami.

Komisarjevsky's accomplice in the home invasion, Steven Hayes, said he thought Joshua "was someone who could embrace and had the capacity for evil as I possess."  Hayes then concludes that Komisarjevsky had "the proper evil intent (but) lacked in the most serious aspects, commitment and control." Steven Hayes, in a letter from prison, claims to have killed 17 other people throughout the Northeast United States, and bragged that they were "perfect victims and well executed, controlled endeavors."  This claim has yet to be investigated, to my knowledge anyway.

Whether or not you believe in God, Satan, Jesus, the devil, Lucifer, demons, angels, spirits, etc., there are people who are fully committed to their belief in these things, and some of whom are in high positions of power throughout this world.  An understanding of the occult, religions, and spirituality will give us all a better understanding of the current happenings of the world.

For more information on Satanic rituals in connection with murders and the occult, check out the website www.WilliamHKennedy.com.  William H. Kennedy is a writer, speaker and documentarian whose work focuses on religious, paranormal and counter cultural topics.

Posted by Connecting The Agenda at 2:53 PM