Connecticut Politicians Do Not Like Being Exposed As Corrupt

Former candidate for Governor of Connecticut, Tom Foley, went to the capital last week to testify in support of a bill that he helped write, with State Senator Joe Markley, the goal of which was to reduce conflicts of interest between public officials, state employees, lobbyists, and unions. 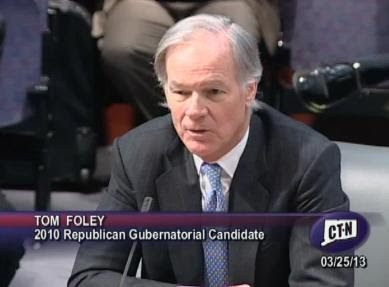 The intent of the bill, according to Foley, is to "prohibit a legislator from receiving more than $1,000  from any organization that benefits from state spending - for example, state contractors, lobbying firms, and public employee unions."  The language of the bill, Senate Bill 727, was criticized as confusing, and, in my opinion, it is, however, more confusing was the bi-partisan backlash that Tom Foley received from the Committee on Government Administration and Elections Committee, for even suggesting that there may be some corruption taking place in the Connecticut legislature.

The full hearing was seven and a half hours, and can be viewed in its entirety here.  The testimony of Tom Foley begins at around two hours and twenty-five minutes in.

The written testimony submitted by Foley, as well as his public address to the committee, were bold in his assertions of the conflicts of interests taking place in the state legislature.  Here are some excerpts from Foley's testimony:


"It is absurd that someone on the payroll of a public employee union or a firm that lobbies state legislators can serve in our General Assembly.  At least a lot of people elsewhere think it absurd because, in most states, and in Washington D.C., a legislator could go to jail  for what is regularly done and perfectly legal in Connecticut.  That is because what is okay around our capital is considered a bribe in most places."

After bringing up the moniker, "Corrupticut", which is sometimes used when a new scandal breaks in the state, Foley continued with the corruption problem in the state:


"Part of the problem is that the foxes are running the hen house.  Our ethic rules start off as "ethics light" and then, on appeal, everyone is given a pass because "people have a right to earn a living".  That's the same argument you hear when you go to a foreign country and the police demand a bribe with the excuse that they are not paid enough.  That may be true, but it is still a bribe.  And in most of those countries, unlike here, it is illegal.  This is Connecticut.  We are part of the United States of America.  Let's make this sleazy practice illegal here, too."

While testifying in front of the committee, Foley said there are lawyers working within lobby groups, that are in the legislator.  Many believe that he was referring to the role of House Republican leader Larry Cafero, who is a partner at the law firm of Brown Rudnick, a firm lobbies the state legislature.  Interestingly, Cafero likely will challenge Foley for the GOP nomination in next year’s gubernatorial race. 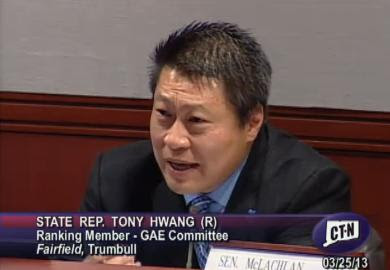 During the hearing, Representative Tony Hwang expressed his concern that Foley was being too hard on the legislators, whom he said consist of people who "give up their time" to "volunteer" in the legislative process, and have to work another job.  I am not sure what Rep. Hwang means by 'volunteer', but Connecticut legislators are paid $28,000/year.  That is equivalent to $13.46/hour, if you base it on a forty hour work week.  ($13.46 x 40 hours = $538.50 x 52 weeks = $27,996.80)  I know plenty of people that have to live on that level of income, and even less.  The minimum wage of Connecticut is $8.25/hour. 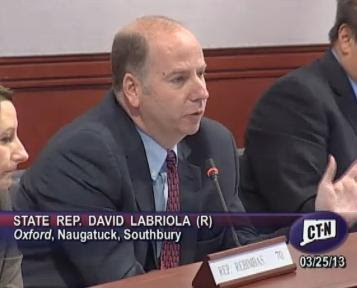 Representative David Labriola, a lawyer, whose brother is GOP State Chairman Jerry Labriola, told Tom Foley that his bill was "absurdly broad", and "ridiculous".  Labriola also stated that he believes it's not "appreciatative, or helpful", to throw around language like "sleezy", an adjective Foley used earlier in the testimony to describe Connecticut politics, or phrases like "the foxes are running the hen house."

The Chairman of the Committee, State Senator Anthony Musto, a lawyer, asked Tom Foley if he can name one example of the type of conflict of interest, that he claims happens all the time in the state.  Foley's response:  "Wasn't the governors wife hired by an entity that receives state funding?", referring to Cathy Malloy becoming the executive director of the nonprofit Greater Hartford Arts Council, a state contractor that received more than $200,000 last year in grants and state contracts.  Senator Musto did not care to respond to that question.

Representative Rosa Rebimbas, another lawyer, was the next public servant to pretend to be appalled at the suggestion that there are conflicts of interest occurring in the state legislature.  Rebimbas went on a condescending rant about how she doesn't like to be referred to as a 'hen', saying Foley's comments are 'demeaning' and 'disgraceful'.  It then became apparent why she was attacking Foley with such vigor; she might be one of those legislators that would be forced out of government with the passage of this bill. 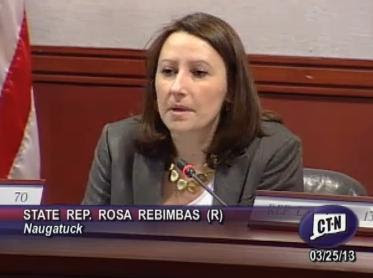 Rep. Rebimbas said that as a lawyer she sometimes represents indigent people who can’t afford an attorney, so instead she is paid by the state for those services.  Rebimbas says she is "proud" of herself for doing this.  I don't seem to understand what she is so proud of.  It's not like she does it for free, Rebimbas gets money from the state.  Either way, this is another lawyer, that will surely push to make the laws more complicated, and overreaching, so more people will have to seek her "professional" counsel.

Tom Foley did not back down against the intimidation presented by Rebimbas.  Foley reversed the questioning and asked Rep. Rebimbas if she ever tried to, or thought about, doing things to bring her organization more money.  Rebimbas stumbled on the question, before being interupted, and rescued, by Chairman Musto who was saying that now is not the time for that kind of questioning. 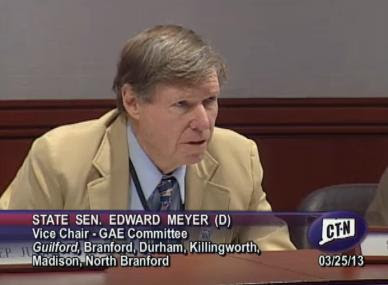 State Senator Edward Meyer, once again another lawyer/legislator, had a compelling argument, asking Tom Foley if he was the right person to bringing an ethics argument forward.  Senator Meyer brought up a 200-plus page report on the reconstruction of Iraq, where Foley was heavily involved as the Director of Private Sector Development for the Coalition Provisional Authority.  Meyer says the report states that the $60 billion that was given to the commission was plagued by fraud, waste, and abuse.  Meyer went further to quote the report saying the contracts awarded were based on personal relationships, and the contractors were paid double and triple the actual cost of the project.

Tom Foley responded that he didn't agree with any of the conclusions of that report, that he had nothing to do with any awarding of any contracts, and that his name is not anywhere in that report.

While I am sure that Tom Foley was only doing this to gain points for his upcoming run for Governor of the state, it was helpful in shedding a little light on the corruption of Connecticut lawmakers, that we all know is occurring.  There are too many laws, too many lawyers, and not enough average people in leadership positions.  We need to break this corrupt, mafia-like, system.

Posted by Connecting The Agenda at 10:36 PM