Potential Conflict of Interest: 33% of Connecticut State Senators are Lawyers 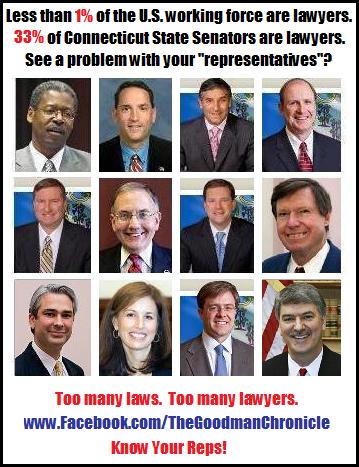 There are over two hundred million working adults in America, less than one percent of which are lawyers.

33% of Connecticut state senators are lawyers.

If elected-government officials really represent the general population, you would think that legislators would come from employment-backgrounds that are reflective of the general population.  In my opinion, a House, or Senate, filled with people of various occupations, like, maybe a grocery store manager, a barber, a construction worker, an optician, a couple reps from the health care field, an engineer, a pizza shop owner, a mechanic, etc., and other people from everyday working-class jobs, would be a proper representation of the people in my community.  One lawyer thrown into the bunch, if there are one hundred representatives, would be a generous representation of the number of lawyers, compared to the number of working adults in America.  So if in the Connecticut legislature, where there is a much higher ratio, one out of every three legislators in the state senate are lawyers (12 out of 36), are the people of Connecticut being properly represented?

Also, is it a conflict of interest when people who make their living directly off of the laws passed in the legislature, work in that legislature?  I believe so.

Lawyers, working within the legislature, have an incentive to keep the laws complicated, and complex, so that citizens will continue to need more and more "legal representation", as hundreds of new laws get presented every year in the state, and federal, government, making it harder for the average citizen to know the laws, and properly protect, and defend, himself against them, thus needing a lawyer.

If, for instance, a simple change in the drug laws were made, where marijuana would be legalized, or decriminalized, as the majority of Americans believe it should be, it may free many people from the unjust bondage of the state, but it would also lead to many lawyers being out of, or lacking, work.  As one professor of law, Ilya Somin, stated, "The War on Drugs is, among other things, a full-employment program for criminal lawyers."

Of course not only criminal lawyers benefit from changes in the law, as Ilya Somin explains,


"In civil law, we have a massive tort law suit system and hundreds of state and federal regulatory agencies that issue mindbogglingly complex regulations that require interpretation by experts if you want to avoid costly liability. And of course we also have an extremely complex tax system that requires many people to hire tax lawyers if they want to keep the IRS off their backs."

The potential personal financial return that a lawyer may directly receive from changes to the law, in my opinion, has become too much a conflict of interest to be tolerated.

How can the law be respected, when there are so many laws, that it is impossible for even the supposed "experts" in the field to remember all of them.  Catherine Crier, a former lawyer and judge, who is now making the case that lawyers, bureaucrats, and politicians have turned the law into an instrument of tyranny, in her book "The Case Against Lawyers" describes the problem of too many laws:


"Most obviously, the law must be known.  It is not.  Today IRS agents cannot give us consistent advice at tax time.  They don't know what the tax laws say any more than we do.  Contractors and manufacturers have thousands of rules to follow governing the smallest activity under our Occupational Safety and Health Administration regulations.  No one can possibly know them all.  Police officers can't even rely on a rule book.  They don't know from case to case whether their judgement is good or bad until some court reviews their conduct."

I fear the problem may get worse, as there is no sign that the number of lawyers in our society is decreasing.  Quite the opposite, there has been great increases in the number of students entering and graduating from, almost 200, law schools, resulting in a virtually unprecedented high percentage of unemployed recent law school graduates.  The federal government estimates that, at current graduation rates, the economy will create about one new legal job, for every two law school graduates, over the next decade.

In 1831, a man by the name of Alexis De Tocqueville was sent to America, by the French Government, to examine the prison system of America.  Tocqueville, instead, wrote a comprehensive analysis on American society, including its religious, political, and economic character, titled "Democracy In America".  Tocqueville wrote about the influence of lawyers, and the potential danger they pose to a free America:


"Lawyers in the United States form a power that...envelops society as a whole, penetrates into each of the classes that compose it, works in secret, acts constantly on it without it knowing, and in the end models it to its own desires."

Tocqueville also seemed to believe, as I do, that lawyers tend to get in the way of change:


"Men who have made a special study of the laws derive from this occupation certain habits of order, a taste for formalities, and a kind of instinctive regard for the regular connection of ideas, which naturally render them very hostile to the revolutionary spirit and the unreflecting passions of the multitude."

Even back in the 18th century, Thomas Jefferson was concerned of the problems that would develop in the American system of government, in relation to lawyers:

I am not sure whether lawyers should be prevented from serving in the public legislature, or whether we should just rely on the constituents to know who their representatives are, and the potential conflicts of interests they possess, but one thing I am pretty sure of is that there are too many lawyers in the legislature, and too many laws being passed by government, and something has to be done to stop it.

In Connecticut, one example of this obvious conflict of interest that is allowed to take place is with House Republican leader Larry Cafero.  Apart from being a representative, Cafero is a lawyer in a firm that lobbies the state legislature.

Here is the complete list, that I have done my best to compile, of all of the state house representatives, and state senators, that are lawyers:


Also interesting to note, the new, controversial, 139-page gun-control bill, SB-1160, that was just signed into law by Connecticut Governor Dan Malloy, that requires gun registration, doubles the penalties on firearms, requires a permit to acquire "ammunition, and much more, had 'YES' votes from 80% (32/40) of the lawyers listed above.  Maybe some of these lawyers that voted YES foresee a lot of potential new lawsuits, and criminal charges, on the horizon, that they can sink their fangs into, because of this new law.  Wouldn't surprise me.


Posted by Connecting The Agenda at 9:18 AM