The Ed Snowden Psy-Op Is Working; Americans Are Changing Their Online Habits Out of Fear

Now that the mainstream media has finally begun discussing wide-spread government spying, with the Snowden/NSA revelations, The Associated Press is reporting that internet users are shifting their online habits, out of fear.

The article claims that people are "scaling back on Facebook posts and considering unfriending old acquaintances" because they are "worried an innocuous joke or long-lost associate" might lead to a
"government probe."  Also discussed in the article is how some people are encrypting chats and e-mails, rethinking the data products they use to ensure privacy, ditching cellphones, and using cash over credit cards.

Many readers of The Goodman Chronicle are aware that the purpose of the mainstream media is not to inform its viewers of truth, but instead to distract, divide, and confuse, the people.  With that said, the fact that the media so feverishly covered government spying, should have arose suspicion.  When the Snowden case first appeared, I speculated that the purpose of the big "man-hunt", and all of the coverage, was to do exactly what the AP is now reporting is happening, put fear into the general public, as well as anyone who is thinking about becoming a "whistle blower". 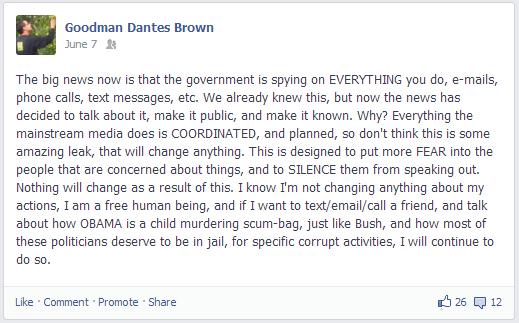 Government spying on every American is not news to people who have been paying attention.  Performing a simple Google search of 'NSA spying', custom ranging the search before the Snowden leaks, will reveal numerous articles detailing information on already known NSA illegal spying, from various whistleblower's revelations, to admissions by government officials during Congressional hearings, and even reports by major newspapers across the country.

Whether Ed Snowden is a collaborator, or a patsy, is still unclear, but it is obvious that this situation is being used to push ulterior motives, and hidden agendas.

Posted by Connecting The Agenda at 8:12 PM