Politicians in Connecticut Want To Save You From Loud Movies 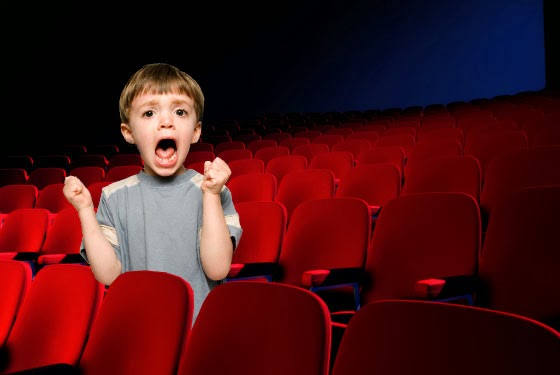 The state's politicians slithered their way back into the state capitol building, in Hartford, last month, convening the regular legislative session for 2014.  Every working day, these politicians are proposing dozens of new laws, all with the potential of directly effecting our lives, and most of us will never hear about it, until we are required to obey the new regulation/law.  That is why I encourage everyone to go to cga.ct.gov, the official website of the Connecticut General Assembly, and take a look at the daily "list of bills", presented by the House and Senate.  You will come across all types of legislation, from the tyrannically frightening, to the ignorantly absurd.  While I view the vast majority of government action to be, at best, useless, and, at worst, extremely detrimental, I find that there are certain pieces of legislation, such as Raised Bill Number 287, "AN ACT CONCERNING THE MAXIMUM DECIBEL LEVEL AT MOVIE THEATRES", that really help show the idea of how absurd government really is.


(a) No person holding a license under the provisions of section 29-117 of the general statutes shall exhibit or show any moving picture film or preview film that exceeds eighty-five decibels. The Commissioner of Administrative Services shall establish the procedure for checking maximum decibel levels to determine compliance with this section.

The information to this bill does not show exactly which member of the Public Safety and Security Committee actually presented this bill, but somewhere in Connecticut, there is a politician that thinks it is a good idea to use the force of the state to make movie theater owners comply with what he feels is a safe movie watching experience.

To understand the absurdity of this potential law, place yourself in the shoes of a movie theater owner.  As the owner, you want as many people as possible to come watch a movie at your place of business, be satisfied with the experience, and eventually return.  To ensure this happens, you do everything in your power to eliminate any aspect of the movie watching experience, that may be detrimental to the viewer, such as the sound level of the movies being too loud, or too low.  If your movie theater begins to develop a reputation for showing movies at a displeasing sound level, then people will stop going to your movie theater.  Therefore, the person who cares most about running a safe, enjoyable, business operation, is the business owner.  Now that we understand this, we must ask; why would a politician involve himself in this process?  The politician is either completely ignorant to how economics works, and truly thinks that problems are best solved by government force, or is corrupt at some level.

Political corruption, a willingness to be dishonest in return for money or personal gain, takes many forms.  Most often, a politician is forced to hide his insincerity, and present a reasonable sounding excuse for using the force of the state to increase the power of government, increase his own power, and/or take a person's money.

In this case of the movie theater decibels, the details are not given, but surely the state will create some sort-of "decibel-rating certification" process, that will, of course, require movie theater owners to pay a "state certified inspector" to verify that the sound level is safe in their theater.  It can be expected that the cost of obtaining this certificate will increase over time, forcing the owner to pass on this extra cost of running a movie theater, onto the customers, in the form of increased ticket prices.  The customers will notice, and may get upset at, the rising prices, but most people will never make the connection that it was their local politician that caused this increase in the price of their movie ticket.

A rising cost in the price of a movie ticket is only one problem of this type of government intervention.  With new laws, come more bureaucracy, and more government created positions to ensure the fulfillment of the new mandates.  As government grows, so do taxes, and government fees, causing many tax-payers to become angry, frustrated, and in want of government to become smaller.  Politicians then tell you how difficult it is to cut government expenses, because they don't want anyone to lose their job, or cut the budget of any "important programs".  The people are told that cutting government services would effect important societal functions, like schools (think of the children!), and road construction.  Of course never mentioned by the politicians, is the various, newly-created, programs, and positions, such as the "decibel-rating" bureaucracy, that appear to be minor in cost now, but will slowly grow, and become more expensive over time.

How does a politician come up with a law like this anyway?  Maybe he/she was sitting in a movie theater, when it got to loud, in their opinion, and they thought to themselves "there should be a law against this!".  That is possible, but much legislation gets proposed by influences other than the politician himself.  Let's take a look at a list of possible people who may want to see legislation like this:

Concerned Citizens.  There may have been some people that did not enjoy their movie watching experience, because of the sound level, and instead of just stopping their trips to theater, decided to get together, and try to get legislation passed, to regulate the decibel rating in movie theaters.  I do not know anyone who would do something like that, and it seems unlikely, but it is possible.

Sound "experts".  If I am someone with expertise in monitoring sound decibels, I can potentially have another source of income, if I can convince a politician to pass a law requiring movie theaters to have their sound checked.  I might even be the one tasked to write the "certification requirements".  I am not suggesting this is what happened in this case, but this type of situation is not uncommon.  For instance, a bill proposed last year in the Connecticut state legislature, which would force mental health assessments on all children in the state, was openly supported by an organization, that is funded by a corporation, that would directly benefit from the legislation.

Big Movie Theater Owners.  It is not uncommon for big business to team up with government, to try to destroy competition.  By creating more regulation on a business, it makes it harder for someone to enter that business, as they have to pay the cost, up front, to enter that field.  The theaters that are already in business, but are struggling, go out of business, being sheltered with the extra expense, while the Big Movie Theater, which is generating profit, can handle the extra cost.  The Big Movie Theater can soon then pass the extra cost on to their customers, through increased ticket prices, without fear of them fleeing to the competition, over rising prices, because competition is becoming less and less, and there is nowhere else the customer can go to enjoy a movie.  However, the Big Movie Theater is limited into how high they can raise their prices, and can't become to absurd, because in a business like a movie theater, if the price gets too high, most people will just stop going, as watching movies on the big screen is not a necessity.  When this type of big business and government cooperation happens in other fields, such as agriculture and energy, it becomes more dangerous to society.  Again, I am not implying this is what happened in this case, but I am just pointing out the many problems of involved government intervention.

Tyrannical Government.  Government involvement into our lives should always be looked at with extreme suspicion.  Governments have been a major cause of unnatural death throughout history.  The term democide means "the murder of any person or people by their government, including genocide, politicide and mass murder", and their have been over 100 million deaths attributed to democide, last century alone.  We already know that the American government works with Hollywood to promote various agendas, such as promotion of, and recruitment for, the military.  (See the documentary Operation Hollywood: How The Pentagon Shapes And Censors The Movies)  Governments using media, including the film industry, to push propaganda is nothing new.  As can be seen in the documentary, "Hitler's Henchmen - The Propagandist Firebrand - Joseph Goebbels", the minister of propaganda in Nazi Germany, Joseph Goebbels, would be heavily involved in the creation of German movies to influence the viewers into the direction of thinking that the Nazi government wanted.

While it would be crazy to think that this "movie theater sound decibel" legislation will lead to mass genocide, it not crazy to think about how government could use legislation like this, to further push a certain agenda.  The power to "certify" businesses, is also the power to not "certify" a business, preventing them from operating.  If a government agent has animosity towards an owner, for whatever reason, maybe even for showing a film that is anti-government, the agent has the power to not allow that owner to operate his business.  This power, as most government power, in my opinion, is too much for a person to have, and inevitably leads to corruption.

This analysis might seem like a long way to go, for a silly piece of legislation such as RB 287, but it is the principle that is important.  Government intervention into anything is dangerous, and has numerous unseen repercussions.  The quicker we are able to discern the effects of government action, the quicker we can get past solving problems using the violent force of the state.

Posted by Connecting The Agenda at 4:37 PM