The Fallacy of the Minimum Wage and CT Governor Dan Malloy

After reviewing a 2014 news conference concerning an increase in the minimum wage, I am completely convinced that Connecticut Governor Dan Malloy does not have the least bit understanding of economics.


"Today I am proud to announce one more piece of legislation that I will be submitting which is to increase the state minimum wage to $10.10 over the next three years"

That some people can think government is able to make our lives better by setting a minimum wage baffles me.  Forget the fact that everything government does is inefficient by nature, or that for government to help one person it must hurt another.

Let us just logically take a look at the idea of minimum wage.  Advocates of the minimum wage range from wanting a federally mandated $15/hour minimum wage to over $20/hour but regardless of the number requested I always have the same question; why stop there?  If you think the government could set a minimum and make everyone's life better, why only $20/hour?  Why not $50/hour? or $100/hour? or maybe the government can pass a law that mandates a $1000/hour minimum wage, so that way we can all be rich, live in mansions, and drive Lamborghini.

Obviously this is absurd, as there are not many businesses that will be able to pay the increased wages, and would be forced to either drastically raise prices, lay off employees, or close.  Well this concept applies to any increase in the required wage.  There are many small businesses that are struggling to stay open and pay their employees at the current required wage, and if it were to increase by just a dollar or two, the business would not be able to pay the extra hundreds or thousands a month and be forced to raise prices, lay off employees, or close.  Now that employee that you were trying to make have a better life, has no job.

As shown by the next clip, Governor Malloy at least somewhat understands this concept but shows further ignorance of economics by brushing the increased prices away as no big deal, and makes the absurd statement that most businesses that pay the minimum wage are forced to stay in an area and can't leave regardless of the increased labor cost.


Reporter:  "Governor, no business has ever passed an exorbitant tax or an increase, its passed onto the consumer [sic].  Don't you feel that you just increased the cost of living in the state?"
Governor Malloy: "Well I think to some extent that may be reflected in costs but if you look at the nature of the businesses that are largely paying the minimum wage, they are businesses that can't leave the state.  They're here, they're providing services and products to the people of the state of Connecticut."

This is such an absurd conclusion that I don't know where to begin to dispute it.  When mentioning businesses that can't leave, I am assuming Malloy is referring to minimum wage jobs like restaurants that are very location focused, that have built their business through satisfying the local population, and can't just get up and relocate.  While it is true that these businesses can't just get up and relocate to another state, there is nothing that prevents them from just shutting down.  If they can't afford to pay their employees, or lose customers due to the increased prices that are a result of the increased salary paid to their employees, then the businesses will just close down.  The first businesses to close will be the single small family owned restaurants as they do not have the resources that big chain restaurants have, to deal with costly government regulation.  A restaurant like McDonalds has the resources to invest in automated order taking machines as a substitute for the newly increased cost of having an actual human employee.  But even a restaurant like McDonalds isn't REQUIRED to stay in a city and lose money.  If government regulations become so taxing that even a big chain store can't make a profit, then they will eventually just close or leave as well. 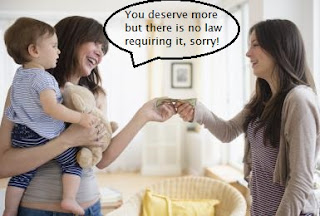 This same concept applies to the other group that Dan Malloy mentioned, waiters.  If Connecticut residents truly feel that the people who wait on them at restaurants deserve more pay, there is nothing from stopping those people from leaving a bigger tip.  It is obvious that Governor Malloy, with his push for an increase in the minimum wage, is just appealing to the low income, low information voter that doesn't understand the impact of government wage laws.

To conclude, more laws and bigger government are not the solution to the countries economic problems, but in actuality the cause of them.  Instead of asking for a government mandated "livable wage", we should be asking why the current non-livable wage of $10/hour, would be an extremely great wage just fifty years ago.  $10 in 1966 would be the equivalent of about $74 today.  This devaluing of the dollar is caused by inflation, or more money being "printed" into circulation resulting in increased prices.  This crippling power that the Federal Government, working in conjunction with The Federal Reserve has, needs to be the main topic of any discussion involving government involvement in wages and prices.  Other than that there is not much Dan Malloy or any Connecticut politician can do to help the economy other than to get out of the way and let the free market operate.

Posted by Connecting The Agenda at 4:34 PM