I first heard of the term "chicken hawk" used by Governor Jesse Ventura to describe those politicians that are always calling for war, but are not willing to fight in a war or too chicken to have ever fought.  Chicken hawk is a perfect term for Governor Mitt Romney.  As he attempts to win the presidency, he touts his eager willingness to expand the United States military presence throughout the world, as one of his best assets.  Whether it is being in Iraq, Afghanistan, attacking Iran, or aiding the rebels in Syria, Mitt Romney believes the United States has a duty to be involved in other nations conflicts.
But what does Mitt Romney know about war ? Unlike Governor Jesse Ventura, Governor Mitt Romney has never served in the military.  While Governor Ventura was in Vietnam, Governor Romney was back home vehemently supporting the war, but at the same time dodging the draft, and getting more than one deferment.
So he thinks like most elites, war is good for making money and bringing change, but never will I, or any of my family, fight in it.  The elite believe war is for the peasants to fight.  Take a look at old photos of Mitt Romney at Stanford, protesting the people who are protesting the Vietnam war.  Here is the link to the New York Times discussing Mitt Romney's pro-war Stanford days, with more pictures. 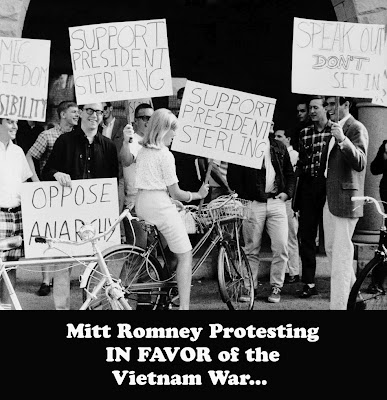 Posted by Connecting The Agenda at 6:12 PM