Election Fraud Is Occurring, And Both Parties Are Involved Election day is almost here, so that means both the Republicans and the Democrats will begin accusing the other side of wanting to tamper with the election total.  The Democrats bring up the case in 2004, when the CEO of Diebold Inc., a company that was the biggest supplier of touch screen voting machines, wrote a letter to his wealthy donor friends that stated he was "committed to helping Ohio deliver its electoral votes to the president (Bush) next year."  An obvious conflict of interest.  And the Republicans say the Democrats oppose things like Voter ID laws, because they want illegal immigrants to vote, which would, by the majority, vote Democrat.

The truth is, they're both right.  Both parties are their own versions of corrupt mafias, fighting for power, by any means necessary.  This year proves no different, as suspicious voter activity is already being shown, even before the November 6th elections.

First there is a company named Hart InterCivic, a company that makes voting machines, serving local governments all over the country. Its clients include Hamilton County, Ohio, which administers elections in Cincinnati.  This company, Hart InterCivic, can be traced back to Bain and Co., the company co-founded by Mitt Romney.  His friends own the voting machines, what a coincidence.

But on the Democratic side, there are reports of early voters, going to vote, and aren't able to select any other choice but Obama!  When they go to select Romney, the machine selects Obama.  These reports are coming out of North Carolina, Kansas, and Ohio.  I am sure this is a coincidence as well, right ?

Remember, these elections effect more than just who the President is going to be.  These elections will pick Senate seats, Congressional seats, and more.

As I have said before, both parties are corrupt, and no good will come from within them.  I believe these Presidential elections to be nothing more than a reality show for the public, to keep them entertained, while the real deals are done by people you've never seen, in places you've never been. 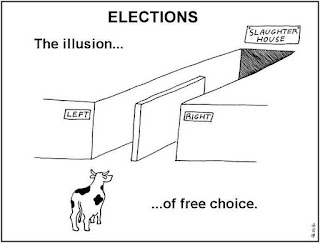 As far as elections, our whole process is a sham.  We should have paper ballots, and everyone able to watch when the votes are counted.  Everything can even be done online, and streamed live, with complete transparency.  But as long as we pretend like our votes are counting, I guess we will continue getting what we deserve.

Here is a video interview with journalist Greg Palast, about his investigations into Mitt Romney, Bain Capital, and the voting scam.  Greg Palast is like the James Bond of journalists, he's the man, check him, his reports, and his books out at his site www.GregPalast.com

Posted by Connecting The Agenda at 3:43 PM