Will President Obama Receive The Same Back Lash Over His Response To Hurricane Sandy Victims, That President Bush Received After Hurricane Katrina ? 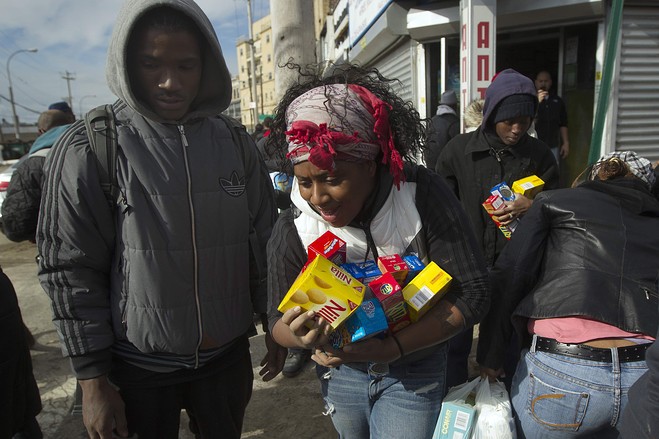 In the aftermath of Hurricane Katrina in 2005, many people criticized, and rightly so, President Bush for the federal response to the victims who were homeless, wet, and hungry.  One heavy influencing critic was hip-hop mogul Jay-Z.  In 2006, Jay-Z released a song called "Minority Report", where he discusses his feelings towards the Hurricane Katrina situation and President Bush's response.  Lyrics to this song include

"Helicopter swooped down just to get a scoop
Through his telescopic lens but he didn't scoop you
The next five days, no help ensued
They called you a refugee because you seek refuge
The commander-in-chief just flew by
Did he stop? No, he had a couple seats...
"I just put my monies in the hands of the same people that left my people stranded
Nothin' but a bandit
Left them folks abandoned"

Flash forward to 2012, Barack Obama is President, and Jay-Z brags that he is "a small part of the reason" that Obama was elected.  Jay also boasts "I got the mayor, on my pager".  So I wonder what his response is going to be now that Hurricane Sandy has hit him hometown of Brooklyn, and everyone from the mayor of New York, to the President of the United States is receiving hostile criticism about the relief effort, or lack there of.

A Staten Island resident confronted Senator Chuck Schumer, pleading for help from Obama, begging the Senator not to leave, and screaming "We Are Gonna Die!".


In the video above, taken by NBC, a Coney Island resident talks about the dire situation in her community, including residents having no food, no heat, and no water.  Another Coney Island resident says people are defecating in the hallways in her building.  They are all furious at the government response, and the uselessness of FEMA.


Of course, in the bigger picture of things, it doesn't matter what Jay-Z has to say, there is a crisis occurring.

I believe what we can learn from this situation, is to not trust in anyone for your safety and protection, especially the government.  Every year the federal government steals vast amounts of money from the people, and fund ever-expanding, useless programs like FEMA, which are supposedly set up, specifically, to be prepared for disasters, but have a terrible track record.  Imagine the audacity of FEMA telling people to prepare for the Hurricane, yet they weren't prepared for it, and they have an enormous budget ! If that money was left to the states, they could create their own disaster relief crews, which would be more reliable, accountable, and cheaper because you wouldn't have to pay some federal bureaucrats to do anything.

This is also an example of how quickly things can turn bad.  The vast majority of us are NOT self-sufficient.  We don't grow our own food, or raise cattle.  We don't know where or how to get clean water, if it stops coming out of the pipes.  And even if you do know how to be self-sufficient, your neighbors still aren't, and that could still lead to a major problem.

My advice: Don't be scared, just be prepared, for the worst.
Posted by Connecting The Agenda at 11:13 PM