A new bill proposed in the Connecticut legislature would require mandatory inspections of motor vehicles that have over 100,000 miles.  The bill was introduced by first-term lawmaker, Rep. Thomas Vicino, D-35th District, and would require drivers to bring their vehicle to the DMV ,"to periodically inspect registered vehicles with an odometer mileage reading of more than 100,000...the list of four items that should be checked: seat belts, wipers, headlights and directional signals."

The state's Department of Motor Vehicles commissioner said Wednesday she opposes the mandatory inspections of vehicles with more than 100,000 miles.  Commissioner Melody Currey told the General Assembly's Transportation Committee that two new vehicle inspections proposed by legislators - one for vehicles with more than 100,000 miles and another requiring annual safety checks for all cars and truck ( introduced by Rep. DebraLee Hovey, R-112th Dist) - are both unnecessary and potentially costly for the agency.

The comments section in many of the online reports of this story are filled with criticism, by CT residents, directed toward Rep. Thomas Vicino, accusing the representative, who is also the owner-operator of Superior Auto in Westbrook, of attempting to use the law to make himself richer.

At CTTalking.com, a person with the username "Mike", gave his quick analysis:

Another user at the same website, with the name "Ed Wood", weighed in on the issue, and raised many of the issues that immediately came to my mind, when hearing about this new proposal:

Many users at TheDay.com, were also critical of the proposed legislation, as one user with the name "caregiver" writes: 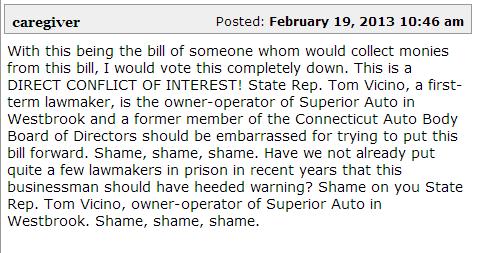 Rep. Vicino seems to be more involved in the automotive repair business field of Connecticut, than just being an owner of a small auto shop.  According to his profile at HouseDems.ct.gov, Vicino "is a former member of the Connecticut Auto Body Board of Directors and was State Chairman of I-Car, responsible for certifying insurance adjusters and repair technicians in Connecticut. Tom Vicino is also a member of the Middlesex Automotive Council."

I could not find much more information on these automotive councils, and boards, that Rep. Vicino seems to be associated with, however, judging by their names, one would assume these to be organizations compromised of individuals that would be affected by legislation having to do with automobiles.  Whether, or not, Tom Vicino is being immorally influenced by his connections in the auto industry, has yet to be determined.  However, there is an already, obvious conflict of interest involved with this piece of legislation, and it should terminated immediately.

Other pieces of legislation proposed this year by Rep. Tom Vicino include AN ACT BANNING SMOKING ON BEACHES, and AN ACT CONCERNING THE TAXATION OF GENERIC CIGARETTES, which would "ensure that generic cigarettes are being taxed as cigarettes and not as small cigars."  It is obvious that Representative Vicino is not a friend of liberty.  The majority of his bills are about sticking the American people for more money, with higher taxes, and a stronger police state.  I encourage any readers from the Clinton, Killingworth, and Westbrook area, to inform your community of the destructive philosophical poison that Democrat Rep. Vicino is bringing to the state legislature.

On a related note, this week I wrote an article titled "United Nations Agenda 21 In Connecticut; New Britain-Hartford Busway, CTFastrack", in which I discuss the ongoing war against drivers, waged by governments at all levels, in attempt to force drivers out of their personal forms of transportation, and onto public transportation, to get more control of the population.  It is still unclear whether this recent piece of legislation proposed by Representative Vicino, and the other by DebraLee Hovey, can be directly tied into United Nations Agenda 21, but the extra burden that it will add onto drivers will undoubtedly further the UN's plans to take cars off the road, lowering your standard of living, and making you more dependent on government.

Posted by Connecting The Agenda at 10:05 AM