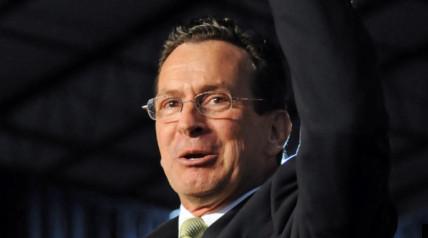 On Thursday, Connecticut Governor Dan Malloy announced a list of five proposals that he wants the General Assembly in Connecticut to approve.  The actual five-page proposal can be viewed as a .pdf file here, but here is a quick list of the proposals.


One interesting thing to note about these proposals is that, seemingly, if you were/are convicted of using marijuana, or have an alcohol-related arrest, the Governor believes you should be exempted from owning a gun.  Today, there is already a list of non-felony misdemeanors that make an individual ineligible for a firearm permit in Connecticut, including some marijuana convictions, but Governor Malloy doesn't think that's good enough.  The proposal reads, "Eligibility requirements should be expanded to exempt individuals that... convictions for use of a controlled substance or operating a vehicle under the influence of drugs or alcohol within the past five years."

Highlights of the press conference include:


On Friday, Governor Malloy attended a Democratic Governors' Association meeting at the White House, where afterward he said mass shootings are becoming part of America's identity, and he seemed to be gloating about the level of gun control able to be accomplished in Connecticut.

"I think [Congress] will act. There'll be a package, I believe.  It probably won't go as far as we'll go in Connecticut.  These instances are going to continue to happen. We're going to have more of these mass shootings.  Aurora and Tucson and Sandy Hook weren't aberrations.  They're becoming part of who we are, and what we are, and what we expect to happen in our states.  It's got to change, it may take Congress a little longer than it will take the people of Connecticut." - Governor Dan Malloy

Other interesting (tyrannical) things to note about the Governors five-page proposal:


Posted by Connecting The Agenda at 9:36 AM