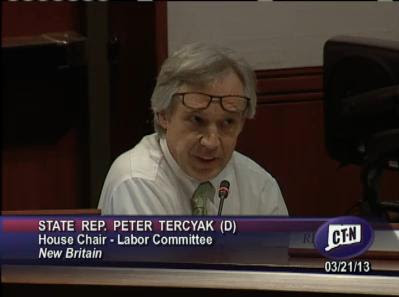 The President of Danbury Nurses' Union, Mary Consoli, was testifying last week, at a state Public Health Committee public hearing, in opposition to a bill that would force vaccinate all health care workers in the state, when Connecticut State Representative Peter Tercyak went on a patronizing rant directed towards Consoli, and anyone else that is against forced medication, that included his belief that "maybe we've been to generous with allowing parents to claim a religious exemption", in regards to children who enter public schools without receiving the 'required' immunizations.

The five-minute exchange between Consoli and Tercyak, began at about 14 hours and 17 minutes into an extremely lengthy fifteen hour public hearing, which can be viewed, in it's entirety, here.  (Sidenote: If anyone reading this has any information, or instructions, in regards to how I would be able to record and capture a good quality short video clip of this exchange, from this fifteen hour stream, please e-mail me: TheGoodmanChronicle@gmail.com)

It is worth reading, hearing, and viewing, more of what Representative Peter Tercyak had to say during this exchange.  When Mary Consoli replied "No, what I'm saying is", in an attempt to correct Representative Tercyak for misrepresenting her beliefs, Rep Tercyak arrogantly cut her off and began:


"What your saying is you don't think people should have to take flu shots..." 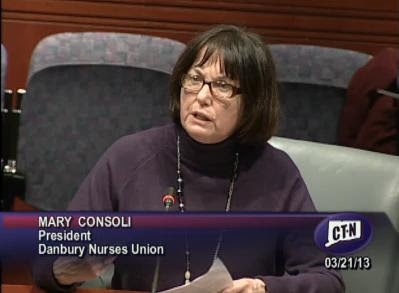 When Mary Consoli was able to reply, she reminded the Representative that children are allowed a religious waiver to enter school without immunizations.  Rep Tercyak then snobbishly replied:


"Yes, and now we see many of the disease we thought we eradicated, coming back, and it will be interesting to see how many children...how many parents have to stay up all night worrying about their children dy...*correcting himself*...their childrens effects from whooping cough, before we decide maybe we've been too generous with allowing parents to claim a religious exemption"

Rep Tercyak eventually realized he was being a douche-bag (to say it best), and he began apologizing to Mary Consoli, after, again, condescendingly cutting her off:

Representative Tercyak seems to embody the control-freak, pyschopath mentality that I have come to loathe in politicians.  The comment, 'maybe WE'VE been too generous', gets me angry.  It is implying that Representative Tercyak believes that he, being a part of the 'we' (the elite, the lords, the royalty) is being generous in allowing the peasants (us) to decide what goes into their bodies.


"We started dissecting the data. What was very surprising was the majority of cases were in fully vaccinated children. That's what started catching our attention," said Dr. David Witt.

Of the 132 patients with whooping cough, under age 18, 81 percent were up to date on recommended whooping cough shots and eight percent had never been vaccinated. The other 11 percent had received at least one shot, but not the complete series.

I am sure the medical "experts" will have some way to combat, and twist, this information to recommend that we should have MORE vaccines, as a result.  That is why instead of a scientific argument against forced medication, my argument is for liberty; LEAVE ME ALONE.

If you believe in the effectiveness of vaccines, then YOU get them, but leave me alone.  If you think my unvaccinated child is a threat to your child, in public school, then YOU send your child to some special school, either that, or, give me my tax money back, that went into the public school, so I can have the resources to home school my child.  We have the right to decide what goes into our bodies, not the government.

Posted by Connecting The Agenda at 3:08 PM