Toll Roads, Gas Tax Increase, and Other Schemes That Connecticut Is Mulling Over To Force You Onto Public Transportation

(This is a video presentation of the following analysis.)

Connecticut state officials met with "transportation advocates" on December 3rd, 2014 for the “Getting to Work:  Transportation and Jobs Access for the 21st Century” event, to discuss the future of transportation in Connecticut.  (Click here to watch the full three hour forum.)

Regular readers of The Goodman Chronicle already know that the future of transportation in Connecticut, if the tax free foundations get their way, is to revolve around increased restrictions on private motor vehicle use, and a focus on public transportation.  Coincidentally (or not), some of the foundations advocating a reduction in private motor vehicle use in the state, were key coordinators for this meeting.  These foundations include the Tri-State Transportation Campaign and the Regional Plan Association, both of which, as pointed out in previous articles, have received funding from the Rockefeller Brothers Fund, an organization advocating a much larger agenda, one aspect of which is the reduction of private motor vehicles. 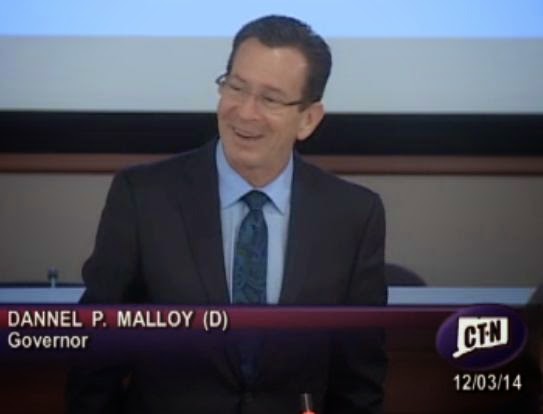 The forum opened up with a quick introduction by CT Governor Dan Malloy, discussing various aspects of the transportation situation in the state.  Along with public transportation goals, Malloy briefly mentions widening certain roads/highways in Connecticut in an effort to provide a better experience for private motor vehicle drivers.  After Governor Malloy gives his four minute introduction speech, the topic of making transportation easier for private motor vehicle drivers is barely mentioned again, by any of the presenters, for the rest of the three hour forum.  The focus of the entire forum becomes about designing communities around, and increasing the ridership of, public transportation.

The majority of people living in Connecticut have no idea that this transformation of society is occurring, as Governor Dan Malloy admits in his introduction talk:

"We've actually not told people the true size and the cost of what needs to be done if CT is to be able to compete in the next 50 years."

The key-note speaker for this forum was Robert Puentes of the Brookings Institution.  Puentes discusses the increasing poverty in Connecticut, as well as the fact that people are driving less, and attributes these situations to the economic recession.  The solution however, according to Puentes, is not to try to restore the old economy, with the same jobs, and have people driving again, but to "subscribe to a brand new growth model", and "restructure the economy" in a way that focuses on creating development, and jobs, around public transportation. 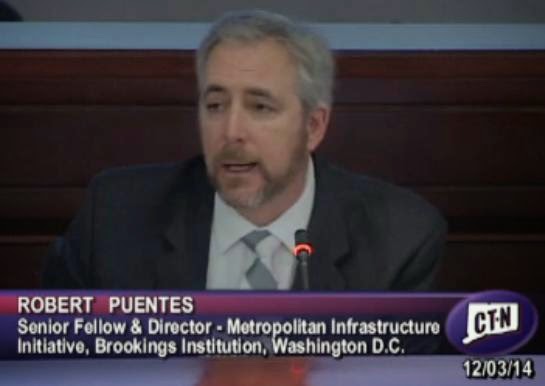 Let us take a more in depth examination of some of the policies of this "brand new growth model" recommended by Puentes.


Also on the panel of this forum was the CT Director of the Regional Plan Association (RPA), Amanda Kennedy.  Before discussing the interactions between Kennedy and Puentes, it is important to briefly detail the influences of tax free foundations funding organizations like the RPA, in the state of Connecticut.

A regular reader of The Goodman Chronicle.com will notice that nearly every analysis written, includes information on how a tax free foundation, or several, are involved with legislation, and/or, programs being advocated, and lobbied for.  Some of the biggest foundations in the country are affecting changes in every part of our society, including transportation.

The significant influence of these foundations, on our society, is not widely understand, though inquiries into this influence have been made, most notably a congressional investigation in the 1950's known as The Reece Committee.  This investigation uncovered surprising information regarding the use of tax free foundations to fund organizations accused of "subversion", and the promotion of collectivist ideals, in the United States.  For more information regarding the findings of this committee, I suggest reading the book Foundations: Their Power and Influence by Rene Wormser.  Wormser was actually a part of the congressional committee commissioned to investigate the great tax-exempt foundations, and wrote "Foundations" to document some of the findings of the committee.

Using the "Getting To Work" seminar as an example, both the Rockefeller Foundation, and the Ford Foundation, are significant contributors to the organization that Puentes is representing, the Brookings Institution, both donating over $1 million in 2014.  As previously pointed out, Puentes was advocating a similar multi-state partnership to the West Coast Infrastructure Exchange, which is financed by grants from the Rockefeller Foundation.

Coincidentally (or not) the Rockefeller Foundations and Ford Foundations are already funding multi-state partnerships involving Connecticut, such as the One Region Funders Group, which "is a partnership of private funders from Connecticut, New York, and New Jersey who are learning and working together to advance and support transportation planning and reform in the tri-state New York City region."  The One Region Funders Group uses this support to fund other organizations, including two that were key coordinators for this forum, the Tri-State Transportation Campaign, and the Regional Plan Association.

These two organizations have already been promoting many of the ideas suggested by Puentes of the Brookings Institution for years, in Connecticut, including the Tri-State Transportation Campaign advocating toll roads, and the Regional Plan Association coordinating multi-region partnerships.

Many more interweaving connections can be made among this small group of influential organizations, who work together on many projects, and share similar goals, and understanding this influence will help put events like this "Getting To Work" seminar in proper perspective.

Knowing that the Brookings Institution, and the Regional Plan Association, share similar financial influences, and objectives, it is interesting to watch the interaction between Robert Puentes, and Amanda Kennedy.  For example, Kennedy asks Puentes what local transportation advocates in Connecticut can do to "move us into the next phase", and Puentes suggestions include areas that the RPA is already involved in, such as the promotion of complete streets, and bike sharing.

Upon critical review and reflection, this forum appears to be more of a promotion of the system that is to be implemented than an open discussion about transportation in Connecticut.

Throughout the meeting, the idea that people are driving less continued to be brought up, and even though Puentes quickly mentions one reason for this may be because of the economy, none of the panelists solutions involved lessening the financial burden to own and operate a private motor vehicle.  Quite the contrary, as pointed out, many solutions suggested would increase the financial burden of owning and operating a private motor vehicle. 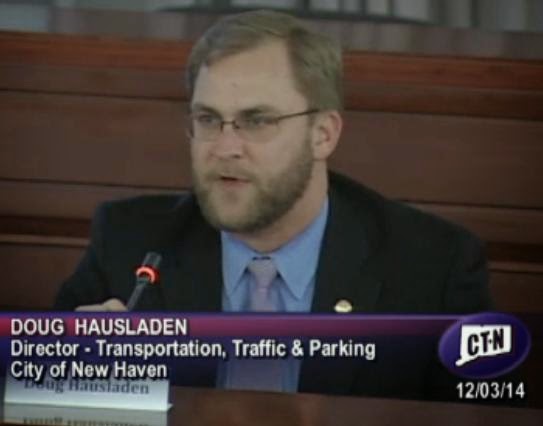 One person that was on this panel, that deserves mention, is Doug Hausladen, director of Transportation, Traffic, and Parking, for the city of New Haven.  Hausladen discusses how the city of New Haven is changing their zoning laws, to reduce parking requirements.  He also mentions a tactic used by the city of New Haven to reduce private motor vehicle usage, the implementation, and enforcement, of a complete streets program.  As detailed in the article Agenda 21 in Connecticut: The Tri-State Transportation Campaign, complete streets programs are complete changes to road construction, and design, in order to remove the exclusivity of private motor vehicle use, and incorporate other forms of transportation, like bicycles and buses, into the process.  In 2008, the previously mentioned Tri-State Transportation Campaign, along with a broad coalition, won passage of "complete streets" legislation in the city of New Haven.  The enforcement aspect of the complete streets program is detailed in the design manual, where it states that police officers will be used to increase traffic tickets, which is just another tactic used to increase the financial burden of those with a private motor vehicle.

One comment by Hausladen shows, in my opinion, the true nature of many of these transportation advocates, who believe that they have the duty, and authority, to control every aspect of your life.  While describing the benefits of this future society of limited private motor vehicle use, and mass public transit, Hausladen says that forcing people out of their cars and onto public transit is good, because it forces people to walk more, creating a healthier society.  The full quote is this:


"One thing that I always talk about is...how far people have to walk to get to a bus stop.  The average transit user walks about 17 minutes per occasion of use, that times 2, for to and from work, is 34 minutes.  That is over the daily recommended cardio excercise.  So actually by being a transit rider, you have lower BMI, and you actually have lower rates of cardio vascular issues."

The last detail of this forum that deserves mention is presenter Micheal Sanders of the CT Department of Transportation discussing the use of RFID chips.  Sanders discusses how bus passes, for now, will use a magnetic stripe card, but the state is looking into using "smart cards", with an RFID chip.  Sanders uses the city of Seattle as an example, where he says the RFID smart card has been integrated with various transportation systems, as well as embedded in the identification card for college students.

This Getting To Work forum was just one of many presentations that have occurred across the state, put on by government agencies, in conjunction with private organizations, and non-profit foundations, in an effort to persuade the public that a future society of austerity, and limited mobility, is inevitable, and the solutions being presented as logical.  Through analyses, such as this, it is hoped that more people will become interested in the seemingly innocuous events occurring throughout government, and critically examine the dubious connections of these policy makers and organizations.

Posted by Connecting The Agenda at 1:57 PM