Ever since the Taliban were removed from power in Afghanistan, by the United States, opium production, which is used to make heroin, has increased dramatically.  Today, 87% of the worlds heroin comes from Afghanistan.  Since the United States military is in control of much of Afghanistan, there has been speculation that the US military is involved in the heroin trade.  This speculation was confirmed when Geraldo Rivera of Fox News did a special report from Afghanistan, where he interviewed Lt. Brian Christmas, and they spoke about how the marines are "guarding" the opium fields.  Of course they wouldn't admit on television that they are drug dealing, so they say that they are "guarding" the opium fields from Al-Qaeda.  This week I found more pictures confirming the involvement of the US military and opium production. 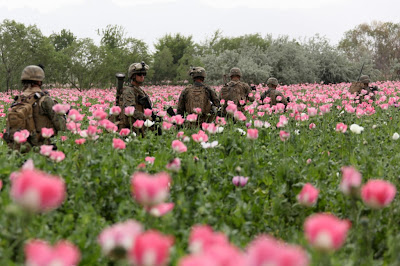 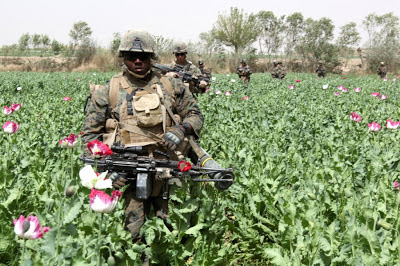 For more pictures showing the Opium and US Military connection, go here.

Here is the video of Geraldo Rivera in Afghanistan, covering up the US involvement in opium production.

Posted by Connecting The Agenda at 7:00 PM