A Final Look At Election Fraud and Manipulation for 2012 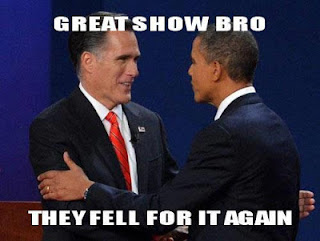 Well Obama has officially been re-elected.  As I have been covering, election fraud and voter manipulation is a tactic used by both Democrats and Republicans.  This years election proved to be no different.  Here I will list the various interesting stories revolving around this years elections, and attribute them to what I believe to be either a Democratic operation, or a Republican operation.

-  North Carolina resident Jimmy Green claimed his mentally disabled step-daughter, along with other patients of this institution, were coerced into registering to vote, and into voting for Obama.

-  Wendell Justin Williamson, a resident of a North Carolina mental institute, who a judge ruled was not guilty of killing of two people by reason of insanity, was registered on September 13th, and cast an absentee ballot on October 15th.

-  Bookies back Obama to defeat Romney.

-  Business associates of Mitt Romney are linked to a company that distributes voting machines throughout the country.

-  In Clackamas County, Oregon, election workers are under investigation for tampering with ballots.  Sources familiar with the incident say their understanding is that a woman filled in a straight Republican ticket on the ballots where preferences had been left blank by voters.

-  Several major companies, including Georgia-Pacific and Cintas, have sent letters or information packets to their employees suggesting — and sometimes explicitly recommending — how they should vote this fall.  In these letters, the executives complain about the costs of overregulation, the health care overhaul and possible tax increases. Some letters warn that if President Obama is re-elected, the company could be harmed, potentially jeopardizing jobs. 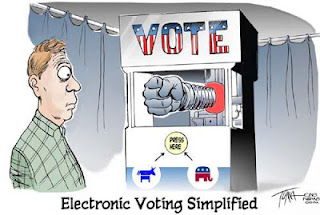 I am just one person, and cannot catch every news story that comes out, so I would assume that this was just a small portion of the real picture of election manipulation that had taken place.  I imagine that election fraud had always taken place, to some degree, but with our electronic voting machines, and extreme lack of accountability, it seems it is a lot easier to do today.  There are many changes that need to take place to our voting process, and I hope we begin soon.
Posted by Connecting The Agenda at 10:41 AM