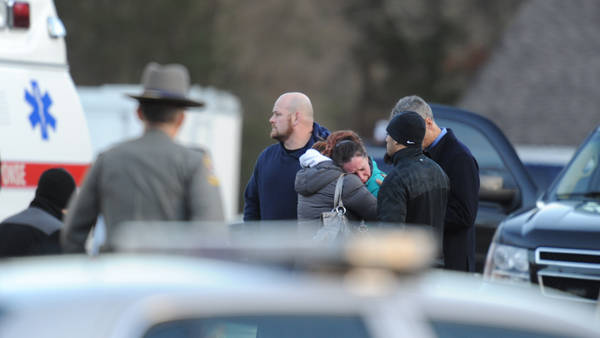 As has been widely reported, on Friday, December 14, a gunman opened fire at Sandy Hook Elementary School in Newtown, Connecticut, killing 26 people, including 20 children.  The story has been everywhere, and here at The Goodman Chronicle, I do not write a story if it is just a regurgitation of what has already been reported, so instead of give you a timeline of events, I will cover the story in a way the media is NOT covering it.  I sincerely offer my deepest condolences to everyone involved in this horrible tragedy, made many times worse due to the fact so many young innocent children were involved.

When friends and neighbors of the shooter, 20 year old Adam Lanza, and his family were interviewed, they recalled Adam as being a genius, and very bright, but "odd", displaying characteristics associated with mental illness, suffering from a personality disorder, needing special help, and being on medication.

This is what I believe the real story behind the shooter should be about, what it was that drove him to this point.  There have been several violent homicide cases in recent American history, that have made the American people cringe in horror at the level of cruelty.  Nearly all these cases had one common denominator; psychiatric drugs.  The website, SSRI Stories, documents numerous violent crimes, and their association with prescription drugs.  Columbine shooter Eric Harris was prescribed Luvox, an antidepressant medication. Andrea Yates, the woman from Texas who drowned her five children in the bathtub, was prescribed multiple psychiatric drugs, including the antidepressant Effexor, which added "homicidal ideation" to the warning label of the drug, after the Yates case.  I can keep going on, but there is a documentary titled, "The Common Denominator - Mass Murder Suicides - Prescription Drugs", that has already done a great job connecting the mass murders of recent past, to prescription drugs, that I suggest everyone watch. (video below)

Why are you not hearing about the prescription drug influence in all of these shootings?  Maybe because so many of the commercials in between television shows and news reports are for prescription drugs.

As with any major tragedy, politicians and the media work together to make sure they never let a "serious crisis go to waste."  The majority of reports of political responses surrounding this CT school shooting involve gun control.  Senator Dianne Feinstein plans to introduce a gun-control bill next year, at the beginning of next years congressional session. President Obama went on television after the shooting and stated, "We're going to have to come together and take MEANINGFUL action, to prevent more tragedies like this, REGARDLESS of the politics", obviously referring to the politics involved with gun control.  New York Mayor Michael Bloomberg has called for a gun ban and has stated, "We don’t need people carrying guns in public places', and has requested that the President do more than take 'meaningful' action, demanding Obama should take "immediate executive action."

In opposition to this argument, many 2nd amendment advocates blame the lack of protection that schools are now under because of the The Federal Gun Free Schools Zone Act that made schools gun-free zones, giving lunatics "an open killing field."  R. Lee Wrights, vice-chair of The Libertarian Party, pointed out that merely the knowledge that armed people will be present acts as a deterrent for would-be shooters.  "They're not going to walk into a police station, and why not? Because that's where the guns are," he said.  This article also points out many cases, where responsible gun owners have stopped or prevented school shootings from happening, that you probably have never heard of before, on your local news.

The media is also trying to spin this tragedy into another interesting direction, pushing more medications!  Instead this time, forced medications. On CNN, Wolf Blitzer interviewed Dr. Sanjay Gupta, and discussed how there are warning signs for these tragedies, chemical imbalances in the killers, and medication to fix it all.  Blitzer then interviews Lise Van Susteren who says we need "legislation that allows people in authority, to do what must be done," when referring to people who don't want to take medication.  Susteren went on to say that parents should be able to call the police and say "my son is acting weird, come and get him."  Blitzer even asks, ""What are the warning signs people should be looking at for someone that might start killing kids?".  Susteren says if your child is "angry", "isolated", or likes "being at a shooting range", these are all warning signs.  The whole segment seems like a big commercial for the pharmaceutical companies, but you can watch it here, and judge for yourself. (video below)

As with any major event, conspiracy theories have popped up surrounding this shooting.  Many people believe that some of the mass shootings in recent history involved the use of mind control, and present the CIA's past mind manipulation programs, like "Project MKUltra", as evidence.  Whether or not any of these shootings involved mind control, we probably will never know, but there are some weird circumstances surrounding this latest murder-suicide.

Initial news reports were reporting a second shooter being involved, and him being in custody.  CBS even interviewed a man who described the police walking a man out of the woods, with handcuffs on, dressed in camo pants and a dark jacket, and when the man walked by the crowd, he said he "didn't do it". (video below)  Updated news reports are claiming the shooting to be the work of 'lone gunman' Adam Lanza, and have no mention of the other man, who he was, and why he was arrested.  This could have just been some guy in the woods, and no big deal.  But some say this could have been the 'handler' or 'controller' of the mind control victim.  Until more information is released on who this guy is, nothing can be confirmed nor denied.


There is also a rumor that the father of Adam Lanza, Peter Lanza, was set to testify in the Libor scandal that 'rocked the banking world in June'.  Though it is being reported on mainstream news that Peter Lanza works as a tax director for General Electric, and his LinkedIn profile says he is the Vice President of Taxes at GE Energy Financial Services, I have found no evidence to make the Libor scandal connection authentic.  Every link seems to lead to message boards and unreliable, shady, news sites.

Going really deep down the rabbit hole of conspiracy, there is a man who claims the movie Dark Knight Rises has hidden messages regarding the Colorado shooting and the CT shooting.  I haven't seen the movie, and I don't know who this man is, but you can check it out, and judge for yourself.

Politicians are already using this tragedy for political gain, pushing their agenda.  I have previously discussed how calls for gun control and forced medication are being brought up, but there are a couple other memes that you should look out for.

We are told from the shooter's aunt that he was home-schooled for some time.  Watch for any propaganda against parents, or children, who are home schooled.  More and more people are seeing the modern day public education system as insufficient, and a propaganda campaign against homeschooling might be used to bring children back under state control.

It also seems as if the mother of Adam Lanza, was part of the "prepper movement", which is people who try to be prepared for an economical and societal collapse, by storing supplies like food, and weapons.  Watch for the media to begin to cast people who are prepared, or "preppers", as weirdos, or potential threats.

The outpouring of love and support for the victims is vast, showing that the majority of people are good people who feel sympathy with their fellow human being.

Posted by Connecting The Agenda at 1:11 PM