Do NOT Use Water with Added-Fluoride For Your Baby 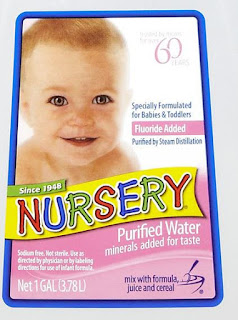 I walked into Walmart in the town of Naugatuck, CT and seen a whole display of Nursery® Water with added fluoride, bring promoted to mothers, with newborn babies, "to mix with formula and cereal", and being a "good source of drinking water for your child."  I have done past research on the negative effects of fluoride consumption, and here I will list reasons NOT to use water with added fluoride, especially for a baby.

-  According to Center for Disease Control's (CDC) own government website, “Fluoride intake from water and other fluoride sources, such as toothpaste and mouthrinses, during the ages when teeth are forming (from birth through age 8) can result in changes in the appearance of the tooth’s surface called dental fluorosis……Recent evidence suggests that mixing powdered or liquid infant formula concentrate with fluoridated water on a regular basis may increase the chance of a child developing the faint, white markings of very mild or mild enamel fluorosis."  A ten year study conducted by the CDC, that ended in 2002, showed a nine percent increase in dental fluorosis.  Dental fluorosis, which is usually small white streaks, or stains, in your teeth, may not seem like a big deal, but could be an indication that your body is receiving too much fluoride.  Over consumption of fluoride can also lead to skeletal fluorosis, a bone disease caused by excessive consumption of fluoride.  Interestingly, fluorosis is more severe among black children, in comparison to white or Latin children, but the CDC can find 'no clear explanation', why that is.

-  The average level of fluoride in breast milk is 0.019 +/- 0.004 ppm (parts per million).  Nursery® Water has a fluoride level of up to 0.7 ppm.  That means that Nursery® water has anywhere between 30x to 150x more fluoride than your baby would receive through breast milk.  Unlike most of Europe, most major cities in the United States add fluoride to their water.  The city of Waterbury, CT, adds fluoride to their water at a similar level to Nursery® Water, 0.79 to 1.11 ppm.  The Nursery Water website has a recommendation for parents who are concerned about fluoride:  "If parents or caregivers are concerned about the fluoride level intake of their children, the ADA recommends mixing baby formula with water that is fluoride free or contains low levels of fluoride."

There is a wide range of information available regarding fluoride, the dangers, the history of water fluoridation, etc., that, I believe, everyone should be interested in.  The best resource I have come across regarding fluoridation, is a book by Christopher Bryson, titled "The Fluoride Deception".  It is available to view online, as a .pdf, here.

On a positive note, in the January 2013 session of the Connecticut General Assembly, CT Senator Joe Markley of the 16th District, proposed an AN ACT ELIMINATING THE REQUIREMENT TO ADD FLUORIDE TO PUBLIC WATER SUPPLIES.
Posted by Connecting The Agenda at 6:20 AM