On Wednesday, President Obama announced the creation of 23 'executive actions' pertaining to 'gun violence reduction', in response to the Sandy Hook school shooting.  He even brought children on stage with him, high-fived, and hugged the kids before signing the actions, which to some, resembled tyrants in the past who used children as props in their propaganda campaigns. 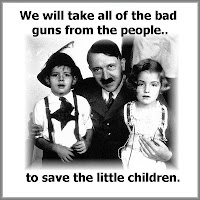 There was talk in the media of a possible federal ban on certain types of assault rifles, and/or ammunition, however none of the twenty-three executive actions call for a physical ban of anything.  There are orders dealing with background checks, information evaluation, new federal programs, and even five orders dealing with 'health care', in relation to gun violence.

Surely these orders will make it slightly more difficult for some Americans, in the future, to obtain firearm protection, but, in my opinion, the main purpose of these executive orders is to further the federal governments involvement into your life through the health care system.

Of the twenty three executive orders, the one that seems the most disturbing to me is number sixteen, which states, "Clarify that the Affordable Care Act does not prohibit doctors asking their patients about guns in their homes."  There was already concern that the Affordable Care Act intruded on doctor/patient confidentiality, and this new executive order furthers those concerns. Essentially, the federal government will spy on you through your medical doctor.  Last month, I reported on a federal program to also turn your local religious leaders (priests, pastors, reverends, etc.), into spies for the federal government. 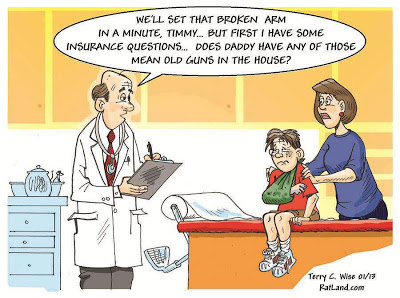 I believe these executive orders are an indication on how the interests that control Barack Obama, plan to handle their opposition.  Instead of direct bans or restrictions on liberties, you could be labeled with a 'mental illness', and from there, your liberties restricted.

In the weeks following the Sandy Hook massacre, I was analyzing and documenting the various politicians, legislation, news reports, and more, that were speaking on enhanced efforts in 'mental health' intervention, that were needed in America.  Popular talking points that emerged were the issues of 'balancing individual rights with the needs of the community' and 'forced medication'.

The propaganda for involuntary commitment and forced medication is still growing.  On Monday, the Denver Post ran a story titled "Sudden state focus on mental health crises poses opportunity and risk", and the opening paragraph reads like this:

"A consensus is building in Colorado to bolster emergency mental health services, allow more dangerously mentally ill people to be locked up before a crisis, and make it harder for them to find guns."


Making the issue of involuntary commitment more complicated, a lawsuit has been filed against the psychiatrist of James Holmes, the suspected shooter in the July 2012 Aurora theater shootings, for failing to 'lock him up on a mental illness hold before his alleged rampage.'  Now, therapists may feel compelled to report every instance of violent talk, lest they face legal consequences if something happens.


"Patient advocates and state officials are negotiating over a legislative bill to broaden criteria for involuntary mental health commitments by courts. Many believe the current standard, "imminent threat," is too difficult to prove, and that people like Holmes could have been forced to inpatient treatment under a standard of "substantial probability of risk."

Interestingly, the Denver Post admits that James Holmes "was getting top-level help, as was the Virginia Tech shooter and other crime-spree suspects."  If I was an investigator, I would say that is a connection that needs to be looked into.  Interestingly, a former cell mate of James Holmes claims to have been told by Holmes that his psychiatrist was "evil" and "programmed" him to kill people.

I understand that there are people that have serious mental issues in our society, and the issue of what to do about it, is complicated.  However, that is not what is going on here.  There are numerous 'experts' that are claiming that a large portion of the American population are 'mentally ill'.  One mental health advocacy group in Colorado claims "about half of us will have a serious enough mental health issue to affect how we function" at some point in life, and according to a Children’s Services Working Group study, more than 20% of the population of Connecticut is thought to have a mental illness.  Also, a coalition of health "experts" claim "only about a third of the people who actually have a mental illness get any care."

Three days ago, NBC ran an article making the argument for tougher gun laws to prevent people with a 'mental illness' from obtaining a firearm, titled "Anger, violent thoughts: Are you too sick to own a gun?"  In a recent interview (video below) with Dr. Andrew Wakefield, Mike Adams of NaturalNews.com, revealed that in the fourth edition of the DSM-IV-TR (Diagnostic and Statistical Manual of Mental Disorders), the so-called "bible of modern psychiatry", it shows that there is a mental condition named "Oppositional Defiant Disorder", and you could be labeled ODD by "disagreeing with someone in a position of authority", or if you "often argue with adults".  The point is, 'experts' have come up with a mental condition for everything and everyone.  Another doctor, Dr. Russel Blaylock recently exposed how recent federal government intervention into the health care system was about forced medication.


On a related note, last week, a West Texas district court approved involuntary medication for the purpose of "restoring Gutierrez to competency".  Jesse Joe Gutierrez is accused of threatening to kill the last three presidents.  Gutierrez refused to take any medicine because he did not believe that he was mentally ill.  Gutierrez appealed a prior decision to force medicate him, stating: “I don’t need medicine.  Your government is broken and corrupt.”  You can read the court case here.

As you can see there are millions of people that "health experts" are looking to label "mentally ill".  We can also see that people who are labeled "mentally ill" will not receive the liberties ensured to them by the US Constitution and Bill of Rights.
Posted by Connecting The Agenda at 6:01 PM