I have seen several interesting documentaries by the filmmakers at VICE.  They have a cool, entertaining way of presenting their information, which is why, I believe, they are popular today.  While I do not deny that you can learn some interesting facts or details about a topic, when presented by VICE, I am always skeptical about where an operations funding comes from, and if there is an agenda that is not being openly presented.

The filmmakers of VICE get flown all over the planet, but at whose expense?  I could not find any reports of direct funding, so I can not make any claims or speculations regarding the specific financial backers of the operation.  What we do know is that SOMEONE is funding VICE, and, inevitably, that person(s) has SOME agenda, as everyone does.  (Sidenote: The agenda of The Goodman Chronicle is to find truth, and promote liberty.)

What first made me skeptical about the truth in the reporting of VICE, was a documentary they made titled "How to sell drugs". (video below)  The description to this video reads like this:

"Ever wonder how to sell $100,000 worth of drugs in a week? We learned the secrets of a drug dealer in NYC - a man who will deliver any substance you want, 24/7. He told us everything - from where he gets his drugs to how his crew operates. Come with us as we take a rare look into the dangerous life of a NYC drug delivery-man."


As I watched this video, I kept thinking to myself, 'this is bullshit'.  Everything about the video seemed to be made up.  The 'drug dealers' in the video all seemed to act, and talk, like cops, probably under cover NYC drug detectives.  The 'drugs', and drug transactions, they were showing did not seem to justify the claim of making $100,000 a week.  And besides, if someone is making that kind of profit, and running a large scale operation to that extent, why would they risk it all, to let a documentary film company, who may be working with the police, or one day be able to provide police with information, follow him?  It just didn't make sense to me.

I didn't give VICE much further thought, until this month, when they released a documentary titled "America's 2nd Revolutionary War." (video at top of page)  I am now convinced VICE has some hidden agendas in their reporting.  I know a great deal of information on the topics discussed in this particular documentary, and in "America's 2nd Revolutionary War", I can see obvious one sided reporting, as well as an attempt to portray organizations like Oath Keepers, and individuals like radio talk show host Alex Jones in a negative light, using distasteful tactics.

The documentary opens up with a clip from the Alex Jones radio show, where Alex is discussing the fraud of the two-party political system, class war, tyranny, etc.  Throughout this documentary, VICE is showing backstage video, which I assume they shot, of The Alex Jones Show, and only playing clips from Alex Jones's radio show.  What is strange to me is that they never once showed any footage of them, interviewing Alex Jones.  If they flew down to Texas, and went to his studio, I would assume they would have asked him some questions for the documentary they are making, right?

Ryan Duffy, of Vice, then sets the tone for the rest of this documentary with his opening statement on the current feelings of Americans, after the election of Barack Obama in 2008, "There was this growing movement of people who really feared the government and rejected this idea of hope all together."

The documentary then proceeds to do a soft 'hit piece' on the "liberty movement."  Instead of interviewing people who are well established and have credibility, VICE interviews people like an elderly gentleman who was protesting for the first time in his life, as well as an overweight, middle aged white woman, who they never name, smoking a cigarette on the sidewalk, holding an American flag, on a rant about the country 'going down the tubes' and saying how we need to 'stop Obama and Pelosi or else "we're going to be in a civil war in a very short time."  They then cut to her screaming on the sidewalk, with some elderly woman sitting down holding a sign, that you can't read, shouting "Deport Illegals" and "No bail out for Mexico".

One of the main people that VICE chose to focus on in this documentary was Sgt. Charles Dyer, USMC.  Dyer had a Youtube channel, and would wear a scary mask when broadcasting.  Dyer seemed to be fairly level-headed, but admittedly was very new to the resistance movement and was only awake 'with the situation' for about a year, when VICE decided to follow him.  If you looked for recent headlines involving Dyer, you would find that, in 2011, he was arrested in Texas after becoming a fugitive, on the run for allegedly raping a six year old girl.

Throughout this documentary words like "The New World Order" and "Global Government" are used, but never once does VICE try to look into what "the new world order" means, or if there really is a "global government" being set up.  They could have at least played the infamous George Bush speech, when he called for a 'New World Order'.  But they did nothing!  After watching this documentary, the ignorant masses will assume these terms to be associated with the 'weirdos' that are shown in this documentary.

Former New York Times journalist Chris Hedges, seems to be brought into the documentary as the 'voice of reason.'  Chris Hedges attempts to brush away any conspiracy talk, by explaining, "Conspiracy theories become a way to explain the chaos of a world people don't understand.  What conspiracy theorists don't grasp is that the elite is also inept.  And conspiracy theorists frighten me because they can't read reality any more than people who naively believe that a corrupt elite is going to bring back the salad days of casino capitalism, can read reality."

I can keep going on with the dubious film making tactics that were used for propaganda purposes throughout this documentary, and there are many more that you can find yourself, but you get the point.  Though, there is a final example I want to use to show the tastelessness, and potential hidden agenda, of the producers at VICE.  I watched the whole documentary, with closed captions on, and everything matched word for word throughout the entire film, except for one part.  At 23:14 in, Alex Jones says "We are going to KICK the new world order's butt", but is quoted in the captions as "we are going to LICK the new world order's butt."  Coincidence? 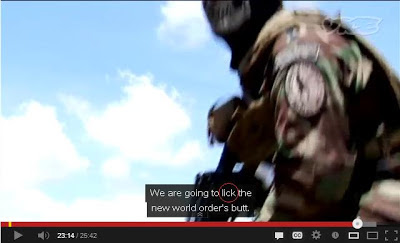 I don't believe VICE is a bad organization.  They make entertaining, and sometimes informative, films.  I am just giving my opinion on what I have been noticing about the things I have been seeing, coming from VICE.

Also, last November, Shane Smith, co-founder of Vice, was on the Joe Rogan Experience podcast.  He was talking about the need for alternative energy, and the threat from global warming/climate change, but when Joe Rogan asked him about Nikola Tesla, Shane Smith claimed to never have heard of him.  I am not saying you need to know about Tesla, to be an expert on alternative energy, but I thought someone in Shame Smith's position would know about Tesla's experiments.

Posted by Connecting The Agenda at 7:13 PM