A Book Every Teacher Must Read: "The Underground History of American Education: A Schoolteacher’s Intimate Investigation Into the Prison of Modern Schooling" 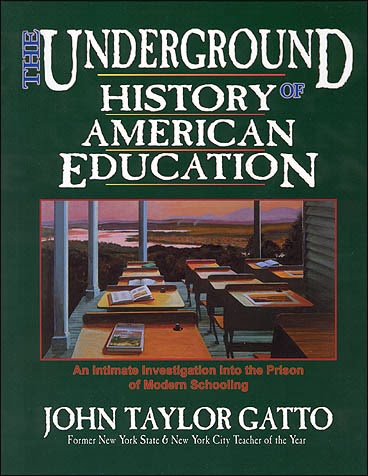 School had always felt wrong to me.  From my first day of kindergarten, where the confusion, and abandonment, of my mother leaving me alone with strangers, for hours, caused water to fill my eyes, to my last years in high school, this place that was supposed to be good for me, school, never felt right.  I would wake up in the morning and quietly wonder how people who claimed they loved their children, parents, could send them to such a destructive, chaotic place.  The typical problems of school didn't effect me, I never had trouble with bullying, and my grades were above average, but there was something much deeper that I couldn't quite put my finger on at the time, that made the whole process seem toxic.

After graduating high school, I began looking for any information that offered an explanation as to how children began going through this process, and why.  After reading various books, and listening to different theories, a foggy picture began to emerge of a history clouded with dubious characters, carrying out a complex plan, misleading parents into offering up their children to a new social experiment, compulsory schooling.  This is the direction that the arrows seemed to be pointing, but I had not come across any serious study of the issue, therefore my conclusions could not be anywhere near concrete.  This was all until I came across the book The Underground History of American Education: A Schoolteacher’s Intimate Investigation Into the Prison of Modern Schooling by John Taylor Gatto.

John Taylor Gatto is not some outsider, with no real knowledge, who just wants to bash the school system.  This man was a teacher, and by all accounts, a pretty good one!  Gatto had won awards; The New York City Teacher of Year, as well The New York State Teacher of Year.  He even had various mainstream news organizations report on his effectiveness as a teacher.  After 30 years of teaching, Gatto abruptly resigned, and wrote an op-ed in The Wall Street Journal titled "I Quit, I Think", where he explains how he came to the conclusion that school is actually causing more harm to children, than good.

The Underground History... is decades worth of Gatto's research, and reflections, on the history of the public school system, and in my opinion, is a must read for anyone in, or anyone thinking about going into, the teaching profession, as well as all parents.  The reality that Gatto shows through this work is that compulsory schooling, in America, was created, and devised, by elite men, who had their own vision of what America should become, and set about using the school system to help create this vision.  These men did not view the teachings of liberty, and freedom, for the individual, as a necessity for their system, in fact, quite the opposite, the goal appears to have been to train children that being part of the group, and obeying authority, is what is important.

There are hundreds of books, articles, and documents referenced in "The Underground History of...", and only a small fraction of those, I have actually read myself.  There are a few interpretations of Gatto's that I somewhat disagree with, though my amateur understanding in this matter does not leave me the capability of providing a professional critique of Gatto's work.  I do plan on reviewing many of these references, and hope to occasionally return to read "The Underground History of...", to gain an even greater understanding of the message Gatto is attempting to relay through this book.

Posted by Connecting The Agenda at 3:11 PM